The word ‘Sapien’ derives from an old latin word meaning ‘Wise’. The word Sapien is most commonly recognized when used in conjunction with the word ‘Homo’ -an anient greek word meaning ‘same, or man’. Human being, in the popular culture generally refers to modern humans, called Homo sapiens.

The sense of deciding what’s right and wrong is one important characteristic that makes Human Beings superior species. Societies look up to individuals who strive to make it better by doing the right things. In comparision, an organization is almost like a bonsai society system where people from diverse background, experience, belief system, come together (for a common goal). They look up to their leaders as the ones who strive to do the right things by first creating a work place that provide employees equal opportunities for performance, growth and wealth creation.

Leadership has many facets. A part essence is captured in the quote below:

In a perfect situation, it is up to the leaders to take up the responsibility of making sure that the organization, including himself, does the right thing. However, perfection in the organisational context is metaphorically like standing on Earth and looking at the Moon. While the Moon is visible to us, it so far away in distant space that the jouney seems ardous, and only for a rare few. And that simply means that everyone, including the leaders make mistakes during their professional journey. Often the biggest blunders are caused by silliest of the mistakes, yes, even by the best of the leaders.

Research shows that some of the dumbest mistakes leaders make, arise from a sense of overconfidence and power ( of position & knowledge). Theoriticians call it the ‘‘human folly’’ . Here are 5 dumb mistakes made by smart managers and leaders:

1.Smart and overconfident: Most leaders develop that unbreakable faith in their intelligence and abilities due to the continuous applause and praise they have received over the years. There is a very fine line between being smart and confident and being overconfident, and this can be crossed over easily by anyone especially someone in a leadership position. Overconfidence often results in them overlooking opinions and suggestions of others while making critical decisions. Being a sole decision-maker is a blind-spotted dangerous place for a leader to be in. It puts smart leaders in high risk of taking the wrong decisions.

2. Micromanagement: Not only leaders, this problem can exists at every level of management within an organisation. Micromanagement junior or mid-management level is acceptable to some extent. However lack of delegation and micromanagement is a big mistake at the leadership level, affecting the performance and morale of teams. Many high performing (individual) leaders end up with demotivated teams. Giving your team  freedom to think, work and providing them with opportunities to use and enhace their skill for which they are hired, is what a smart leader does. You may want to hold their hand in a crisis situation but do not hold their hands back from exploring new ideas.

3. Dodging rules: “Walk the talk”, a simple statement to comprehend, becomes a slippery path when smart leaders start making exceptions.They slip up when they fail to adhere to the rules and protocols which in the first place, were set up by them. The slip ups raise doubt about the values & principles of the organisation, and thereby the credibility of the leader who is the prime custodian of all these. When leadership bypasses the rulebook to operate, they put the entire organisation in jeopardy by breaking promises.

4. Unwillingness to accept feedback: Smart people tend to undervalue the opinions of others, which means they have trouble believing that anyone is qualified to give them useful feedback. This belief often end up as toxic reflux in professional environment. It is hard for anyone to graciously accept the fact that they’re wrong. Infact the act of accepting constructive feedback/ criticism is often a pracised poise. It is even harder for smart people to  do so. For them being wrong can feel like a personal attack, and being right, a necessity. The silliest mistake made by smart leaders is to stop taking frequent feedback (on self)

5. Pushing people too hard: Strong performers/ leaders might develop overachieving personalities because things come so easily to them. The question that they need to ask themselves is, ‘’Do I really have the mindset or the emotional intelligence to lead people to accomplish great things together?’’. Smart leaders may tend to set the bar too high, and when people take long or don’t get things quite right, they assume it’s due to a lack of effort. So they push even harder. Setting of unrealistic goals and targets tempered with with rigidness in accepting feedback lead smart leaders to push their people too hard. They might simply not understand how hard some people have to work to accomplish the same things. Such events can be balanced by Situational Leadership, which is an adaptive leadership style that encourages leaders to take stock of their team members, weigh the many variables in their workplace and choose the leadership style that best fits their goals and circumstances.

Even the smartest people will have errors in judgment, blind spots, and habits that get them into trouble. Eventually, a smart leader will become a good leader once he does something very counter-intuitive: surrender control. This good leader is he who fosters high trust, high risk-taking, and high creativity because they take the higher road of sharing their power and releasing their control over people. 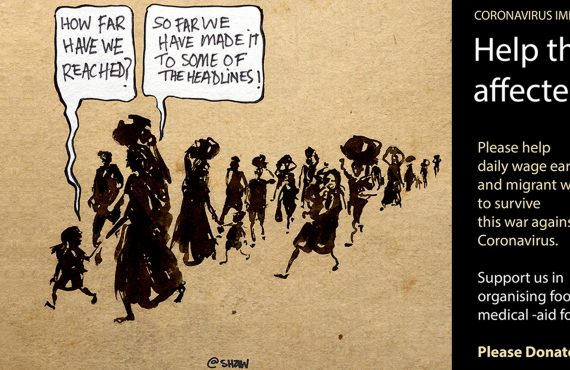 Our Fight Against Corona Virus Impact On Migrant Workers

A view from a supply line of the War on